I’ve decided with warm weather nearly upon us, now would be a great time to do a series of outdoor-themed posts.  You might be thinking: “But Andrew, aren’t like all of your posts outdoor posts?”.  Yeah, I guess they are, but this time I’ll be featuring guest writers sharing their favorite outdoor experiences.  It’s going to be EPIC!  My first contributor is Andrew.  You might know him from his other posts on this blog.

Two years ago, when Tara was living out here and I was still in Nebraska, I came out to visit for a weekend in mid February.  One of the highlights of the weekend was our run on Antelope Island.  I’m sure I’ve said it before, but Antelope Island is one of our favorite places out here.  As the name implies, it is an island out in the Great Salt Lake that you can drive out to.  It has an abundance of hiking trails and wildlife, including bison that roam free throughout the island.

Since we were both training for a half marathon at the time, we endeavored to tackle an eight mile loop trail run on the island.  The run started off amazing.  Not too cold, spectacular views, and some really challenging hill climbs.  However, probably a little more than halfway around the loop, we encountered a herd of bison right on the trail.  Still quite hopeful to complete the loop, and not be forced to turn back the way we came, we attempted to leave the trail, and take a wide detour around the bison.  However, as we came even with them, they began to amble towards us.  Thoughts of all the horror stories of people getting charged by bison in Yellowstone rushing through our heads, we quickly retreated the way we came and the bison promptly stopped their approach.

Antelope Island, shortly after the run with the bison.

Discouraged, but still determined, we tried to cut an even wider swath on the other side of the bison, this time down the ridge out of sight from them.  But again, as we came even with them, we saw their heads appear over the ridge, this time coming at us at an alarming jaunt.  Nothing short of terrified, we again retreated the way we came, relieved to see the bison stop their charge the second we crossed some invisible boundary known only to the beasts.  With that, we recognized defeat, bowed our heads, and took the run of shame back the way we came.

It was not until we had put some distance between us and the territorial creatures, and my pride had some time to recover, that I came to fully appreciate that experience in the wild.  We had encountered these remarkable beasts in their habitat, ourselves basically naked, nothing to protect us.  And we said: “Screw you, bison, this is our run, and we will tread on your turf!”.  And they said: “No!  You will not”.  With our civilization and our technology, it is easy for we humans to cheat nature.  This is fine.  This is what makes us the dominant species.  But we can’t fully appreciate our roots unless we venture out and take risks from time to time, and walk with the beasts.  It’s in experiences like these that the primordial part our our brains comes to life, and we find we don’t need to learn the rules of nature—we’ve actually known them all along.

Last summer, Tara and I were on a backpacking trip in the High Uintas here in Utah.  Our first night out, we set up camp on the edge of a large meadow with a stream meandering through it.  After dinner was finished, and the tent was pitched, we spent the last part of the day sitting down by the stream watching the stars begin to appear in the darkening sky.  Presently, a large moose emerged from the trees no more than 100 yards from us, ambled down to the stream, and began to drink.  That, to me, is respect.  That an animal that huge and that powerful can basically say: “I trust you enough to come have a drink with you”, is an incredible thing.  You might counter that the Moose is simply tamed, and unafraid of humans due to the large volume of hikers that travel that trail each summer, and you’d be exactly right, but that’s not the point here.  The point is that feeling just as vulnerable as that moose does, and developing a mutual respect for one another is a soul-changing experience that everyone should enjoy from time to time.  Get outside! 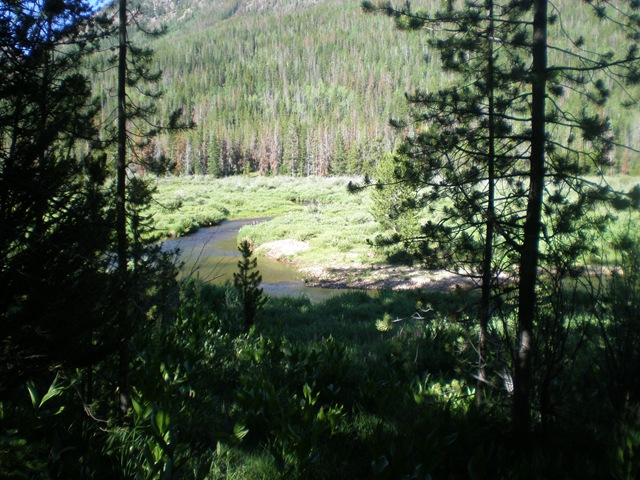 And yes, Robert Redford, Jon Krakauer, and Jack London are my heroes, but so is the moose.

One thought on “The Respect of a Moose”