A few months ago, while browsing the impressive collection of music CDs at the library, I came across an indie-looking album that struck my eye.  The band’s name: Harry and the Potters.  SOLD.  I excitedly popped the CD in for the drive home.  It was pretty much as expected: lackluster indie rock redeemed by humorous, well-researched lyrics.  I enjoyed the album, but not enough to rip it to my computer, and so, in a matter of 2 weeks, Harry and the Potters came into and out of my life.

Fast forward to about a week ago.  Family friend and AbsolutelyAndrew Endorsed Blogger, Kara announced on Facebook that a band called Harry and the Potters would be playing a free show at the library.  The name sounded familiar, so I looked it up and realized it was in fact the same band I had discovered months earlier.  I needed no convincing.  We were going.

The show was pretty much incredible.  Evidently Harry and the Potters has quite the cult following, comprised mostly of high school students with a few 20 and 30 somethings.  These people were just as entertaining to watch as the band was.  I told Kara that we should rock-paper-scissor for blogging rights to the event, but she said we could both do it and link to each other.  So here I am, competing with a NANOWRIMO winner… 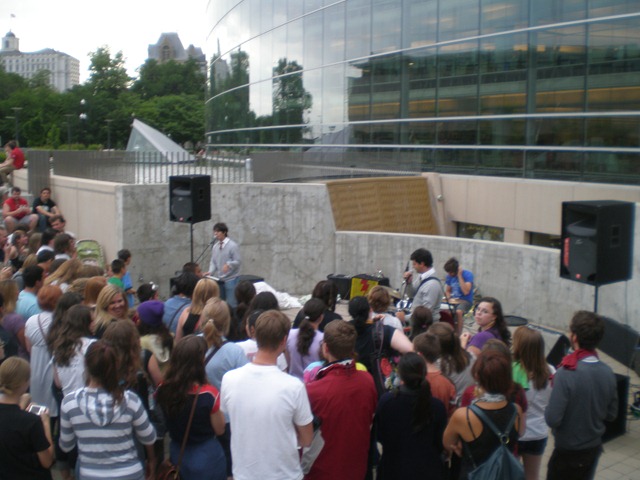 Omaha Readers! These guys are playing at the Omaha Library on July 2nd!