This past Tuesday I received a call I’ve been expecting for a while.  In the same strong, calm voice she used throughout my childhood to reassure me there was nothing to fear, my mother told me my grandfather had passed away as he slept, never betraying, with even the slightest crack or break, that she had been with him the previous afternoon, said goodbye, and then waited by his side until the wee hours of the morning, and probably hadn’t slept since.

Grandpa did not speak a lot.  In fact, his voice was so gruff it almost sounded like it pained him to talk.  But when he did, it was often to tell a server if wasn’t finished yet as he white-knuckled his plate (Great Depression kid with a huge stomach), or to tell a joke.  He and my brothers and I shared an appreciation for big-breasted women and we loved sharing racy jokes.  This put my poor mother in the awkward situation of wanting her boys to bond with their grandfather yet disapproving of the topic.

When Grandpa laughed, his face would contort and his eyes would squint into a look of pure glee–an expression that beautifully contrasted his otherwise gruff, German demeanor.  When Ben laughs, he makes this exact same expression.

Once on a family trip to Buca di Beppo (our favorite restaurant while it was open in Omaha), my brothers and i discovered pictures of pin-ups adorned the walls of the men’s room.  We told Grandpa this and he immediately excused himself to go to the restroom.

Grandpa had a wide repertoire of jokes and euphemisms he had picked up during his time in the Army in WWII.  One of my favorites was “Used Beer Department”, which I referred to as “Used Mountain Dew Department” until I went to college.

He was impressively up-to-date on technology his whole life.  He was an early adopter of email and even had a Facebook account.  For a while, he was buying nearly every new Apple computer to come out.  He skipped over the first iMac (I imagine neon colors weren’t really his thing), but when he got the Sunflower iMac, I would make excuses to come up and play with it.

Oh how he used to pound the mouse and keyboard!  I’m not sure why he thought he had to hit the keys that hard.  Then again, I kind of do the same thing…

With a rich German ancestry and having been stationed in Belgium in WWII, Grandpa spoke fairly fluent German.  He was delighted when my brothers and I elected to take German language classes in high school and used to bark “Bitte leiten Sie die Kartoffeln!” across the table at us in true German style.  Alas, his dialect differed from the pasteurized German we had learned in school so we could never decipher what he was saying.

Grandpa loved his beer and wine.  Once on a family vacation in Arkansas, we visited a winery where my parents bought a few bottles and Grandpa bought an entire case.  A month or so later, he had finished all of his wine and was quite incredulous when he learned my parents had barely made a dent in theirs.

Christmas in Tahoe in 2011 was the last Christmas we’d spend together as an entire extended family.  We had 15 people crammed in Larry & Sonja’s cabin and it worked well enough.  I brought some of the stout I had brewed to share with everyone.  Grandpa took one sip and declared it good.  It is the best and most regarded compliment I’ve ever received.

I don’t think I fully realized how similar I am to Grandpa until after his death.  He was a man that never aged or became complacent mentally.  He was always learning, always asking tough questions his whole life.  I truly respect that.

As I drove home from work after receiving the news, I reminisced on all my memories of Grandpa and said to myself, as tears of joy streamed down my face, “My grandpa was totally bomb”.  I’ve never used those words to describe anyone in my entire life.  Why they first came out to describe a 92 year old man, I will never know.  But it’s totally true. 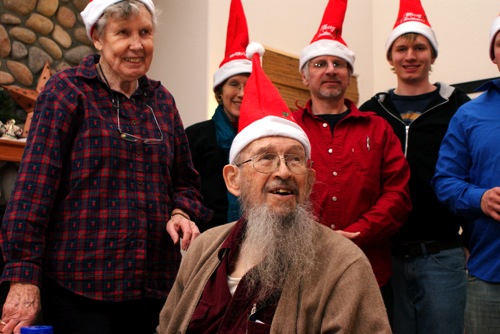