In March, Tara and I took a second honeymoon.  We didn’t really call it that, but it was a full week vacation to the tropics just the two of us, and we haven’t done anything like that since our honeymoon.  We first visited Cozumel on our honeymoon cruise and had wanted to return ever since.  And so, in the peak of spring break season, we boarded a plane and flew from winter to 80 degree sunny skies.  After a 45 minute ferry ride on rather choppy seas, we landed in Cozumel and took a taxi away from the city to a small all-inclusive on the beach, surrounded by jungle.

We had left all the spring breakers in Cancun.  This resort was secluded and quiet.  The demographic was surprising, but a good mix.  It was mostly older (than us) couples and families with some retirees.  I think we were the youngest people there that hadn’t come with our parents.  At least 50% of the guests were Canadian.

The all inclusive bar scene is fascinating.  Everyone gets up pretty early because it gets dark so early and by 7 AM the sun is out in full force.  After eating breakfast, the guests head down to the beach bar and line up, waiting for it to open at 9.  It is not unlike a herd of cattle eagerly anticipating meal time.  Veteran all-inclusivers have brought big gulps and travel coffee mugs to have their libations made in as the resort cups are so small they make Main Street’s glasses seem king-size.  My UNL Alumni readers will appreciate this comparison, for everyone else, the glasses are really friggin’ small.

The bar tenders are totally chill, but can make frozen cocktails faster then anyone’s business.  90% of the patrons order drinks that require the use of a blender, so there is an “express” cerveza line.

Early in the week, we took a taxi to the only city on the island, San Miguel.  We went to the Cozumel history museum at which I was able to get my Carribean anthropology and geography fix (totally fascinates me for some reason).  We then enjoyed lunch at the small cafe at the museum overlooking the ocean. 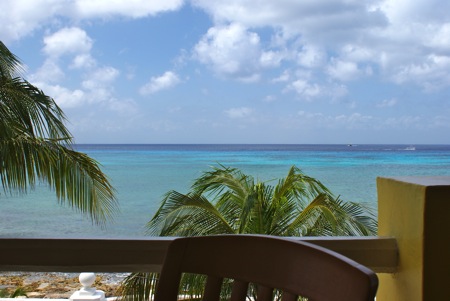 We tried some shopping in the afternoon, but quickly tired of the high pressure marketing made prevalent by cruise shippers’ tendency to spend a lot of money fast just because they think they’re purchasing an authentic souvenir from a land they spent 3 hours in.  At one point, while we looked for a sun hat for Tara, an American woman came over in a sun dress she had tried on and asked “You like?”, evidently forgetting that although she was in a foreign country, most people around her spoke fluent english.

We padded our way out of the cruise ship zone seeking a mini golf course I had read about that supposedly provides walky-talkies so you can call in drink orders while on the course.  Alas, it had gone out of business, but some excitement was had anyway when I nearly leaned on a massive iguana sunning itself on a stone wall.  Out of my peripheral, I had mistook it for a sculpture.  I swear it made a weird croaking noise to alert me of its presence. 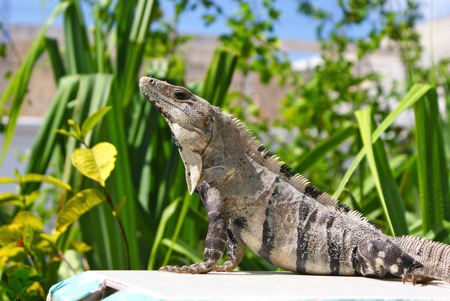 We then came upon an old catholic church with its doors open welcomingly so we stopped in briefly to look around before heading to a seaside bar for Pina Coladas and churros. 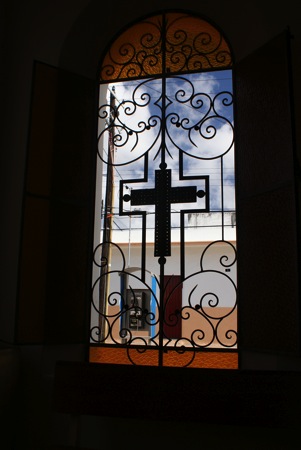 Another day, we rented a car and drove down to Punta Sur Eco Park for exploring and snorkeling.  The recommended snorkeling route was to paddle 300 meters off-shore to a buoy, then turn right and follow the reef which parallels the shore for about half a kilometer until “you see a black coral”, then head back to shore and walk back up the beach.

This turned out to be a marathon of a snorkeling trek, but was absolutely amazing.  There was so much sea life and the water was perfectly clear.  We were exhausted by the end and it felt like we were having to fight the current to get back to shore.  When we finally did reach the beach, we collapsed on the sand to rest and found ourselves completely alone with nothing but palm trees and jungle to the inland and pristine blue ocean off-shore.

We walked back up the beach back to the little outfitter to return the gear.  We checked out the light house, and some of the other sites at Punta Sur before driving on to the far west side of the island to the same seaside cantina we ate at on our honeymoon, and once again had barely enough cash… 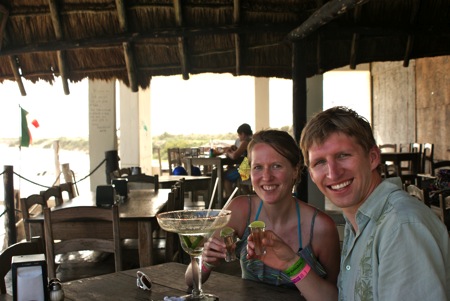 The rest of the time we spend relaxing on the beach and snorkeling.  We did aqua aerobics one morning, or as the Mexicans call it: “Exercise in the Pool”.  This turned out to be a gaggle of drunk, middle-aged women and Tara and me.  The young male instructors knew exactly how to appeal to this crowd and the workout involved lots of pelvic thrusting and cat calling.  I felt totally out of place and was wishing I’d hit the pre-workout Pina Coladas a little harder.  At the end we all lined up and gave each other massages.  Yep, that happened.

Oh yeah, I should mention the limbo contest that I took 3rd place in, beaten only by a couple Brazilians.

The week went way too fast.  I’d highly recommend this destination to anyone considering the Cancun area.  Here are some details if you decide to go:

Flying into Cancun is the cheapest, but requires a 45 minute taxi to Playa del Carmen followed by a 45 minute ferry to Cozumel.  Next time I think we’ll fly right into Cozumel.  Even just avoiding the Cancun airport would make it worthwhile.

We were infinitely glad we went with the all-inclusive.  It was so nice not to have to worry about meal expenses all week.  Unlimited alcohol is a nice perk as well. 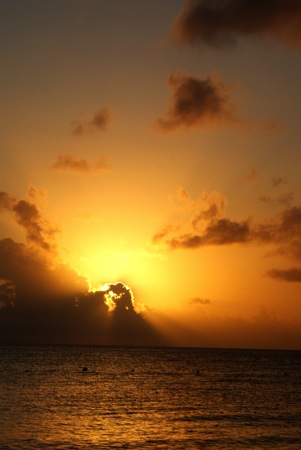